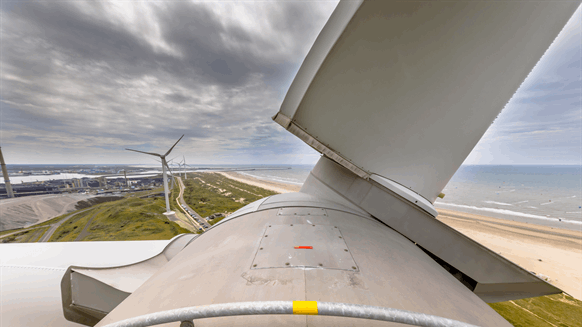 SSE Renewables revealed this week that actor Martin Compston has been hosted at the company’s Toddleburn Wind Farm to film a segment of an upcoming episode of ‘Martin Compston’s Scottish Fling’, which is currently airing on BBC Scotland and BBC Two across the UK.

During the visit, Compston and fellow presenter Phil MacHugh had the opportunity to view the top of one of twelve Siemens turbines located at the site between the villages of Heriot and Oxton in the Scottish Borders. SSE Renewables highlighted that the entire visit took place “under the watchful eye of the team” and revealed that film photography was carried out via drone, traditional television and Go-Pro cameras.

“It was great to receive such a warm welcome from the Toddleburn team. We had a lot of fun on this shoot, and I know Martin and Phil really enjoyed their day as well,” said David Marshall, executive producer of Martin Compston’s Scottish Fling, in a statement posted on the SSE website.

“The episode’s final play comes with a surprise moment for Phil that I’m sure everyone at SSE will enjoy watching. It was clear that everyone present’s priority was the safety of the presenters and the team and I want to thank the team for their outstanding professionalism,” added Marshall.

SSE Renewables Onshore Wind Regional Manager Roy Sloane, who oversaw filming with colleagues that day, said: “It’s wonderful to be able to show what we do in a different type of media than newspapers. commercial or local venues and to bring the work of SSE Renewables to a new audience”.

“We had a great day welcoming Martin and Phil to Toddleburn in April. It was something different from a normal working day and I know the crew enjoyed getting involved and helping with the filming,” he added.

“I am proud of the professionalism of our team. Safety was paramount throughout filming and I hope that will become apparent as colleagues watch the program,” he continued.

Throughout the BBC’s six-part series, presenters travel far and wide across Scotland, meeting different people and adventures along the way. The episode featuring SSE will first air on Thursday this week on BBC Scotland at 10pm and across the UK on BBC Two at 9.30pm on Friday.

Martin Compston’s Scottish Fling isn’t the only energy-related show Compston will be on this year, with an Amazon representative confirming to Rigzone last month that his series The Rig will be released later in 2022.

Amazon revealed a first look at the cast of its series The Rig in September last year. In addition to Compston, who plays communications agent Fulmer Hamilton in the series, The Rig stars Game of Thrones (GoT) stars Iain Glen, who played Ser Jorah Mormont in GoT, and Owen Teale , who played Ser Alliser Thorneon in GoT.

To contact the author, send an e-mail [email protected]