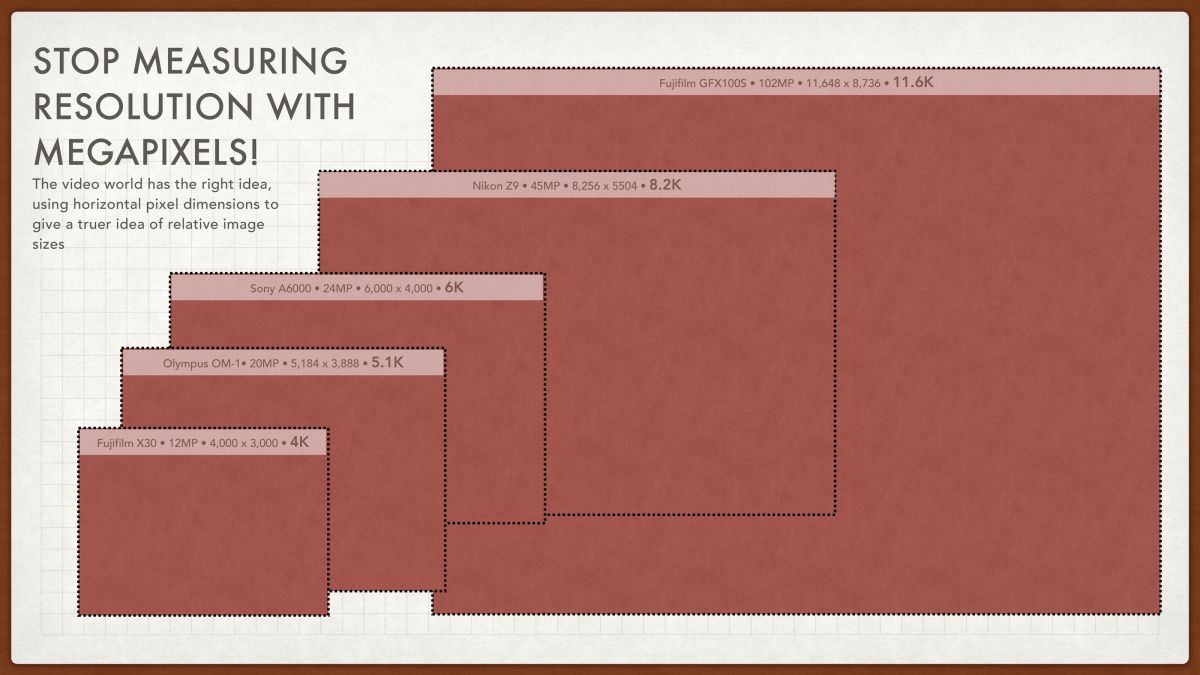 Digital camera manufacturers have used megapixels as a measure of camera resolution since their invention. The problem is that it exaggerates the differences between the cameras in a way that doesn’t accurately reflect real-world usage.

The problem is the math. Megapixels only tell you the size of the image in terms of area, but what most of us want to know most of the time is its width or height.

This is the most important measurement for web design, creating presentations, slideshows, wall prints, business publishing, and even for using still images in movies.

The fact that the Nikon Z9 has 45.7 megapixels means nothing to you. What you really need to know is its horizontal resolution so you can directly see its relationship to 8K video and determine the print size you’ll get at a standard print resolution of 300 dpi (27.5 x 18.3 inches – not bad!)

What interests us most is the width of the image, or its height, not the two multiplied together. If you settle for megapixels, the Nikon Z9 45MP seems to produce images twice as large as a Sony A6000 (more or less 3MP).

This will not be the case. In fact, if you double the megapixels, you’ll only get a 1.4x wider image. The image region will be 2x larger, but its width and height will not.

Why the video industry is right

Admittedly, with standard and Full HD, the video industry still quotes vertical resolution (720 and 1080 respectively), but beyond that it’s replaced by horizontal image resolution – and that certainly makes the sizes of much clearer picture.

This doesn’t just apply to video. Quite often you will also want to know the width of the image for still photography, for the reasons we have already discussed above.

So why not look at the camera resolution in terms of video instead? Our diagram above shows a handful of different cameras and resolutions and how that equals actual width and height, not the two multiplied together.

Note that our diagram does not show relative sensor size, only relative image size.

Cameras are better/closer than we think

Thus, the smallest camera in the diagram is the old compact Fujifilm X30 with “only” 12MP. Yet with a horizontal resolution of 4,000 pixels, it can still take 4K photos – easily big enough to fill all but the highest resolution screens, enough to slot into 4K movies, and plenty for social sharing and nearly n any type of web design.

Looking at it this way gives a much truer idea of ​​the relative sizes of the images. Interestingly, for example, images from the Nikon Z9 are only twice the pixel width of the tiny X30.

Camera makers love big numbers, of course, and megapixels are the biggest numbers of them all. But they exaggerate the differences between the cameras and the megapixel ratings don’t tell you directly how wide your image will be in pixels – which is probably what you really want to know.