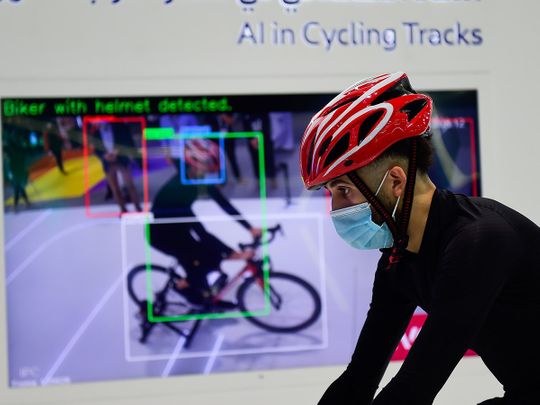 Dubai: To ensure road safety, Dubai will soon have high-tech cameras installed on the city’s cycle lanes to detect cyclists without helmets.

The Roads and Transport Authority (RTA) first implemented the trial phase of the artificial intelligence-based solution on the Nad Al Sheba cycle path and will soon implement it in Dubai, has Meera Al Shaikh, RTA’s director of intelligent services, told reporters on Sunday. opening day of the 41st edition of GITEX Technology Week.

“Using AI [artificial intelligence] in Cycling Tracks solution, which is a proof of concept developed by EVOTEQ [a digital transformation solutions provider], this revolutionary solution aims to ensure safer roads for cyclists by deploying digital solutions that create a significant impact on people’s lives, â€said RTA.

Wearing protective helmets for cyclists is compulsory in Dubai. Al Shaikh said having cameras on cycle paths across the emirate “will give cyclists an extra boost to be more safety conscious.”

She added: â€œThe successful trial at Nad Al Shaba will pave the way for a wider implementation of security cameras across the city. “

RTA said the camera will also promote cycling culture in Dubai. The city currently has 463 km of cycle paths, which will be extended to 739 km by 2026, with the aim of connecting vital areas with various public transport stations.

“With the city’s goal of becoming the most cycling-friendly city, the use of next-generation technologies is essential as cycling is not only a sport but also a vital link to meet the mobility needs of the first and last mile, “said Mohammed Yousuf Al Mudharreb. , CEO of RTA’s enterprise technology support services sector.

Jihad Tayara, CEO of EVOTEQ, said: â€œWe have focused on using the latest AI and IoT technologies. [Internet of Thing] technologies to validate the viability of the solution by building and testing four key functionalities: cyclist detection, helmet detection, speed and total occupancy. We have developed an extended project roadmap for the complete track trip for cyclists, which aims to improve their safety and experience.

According to RTA, â€œThe data collected by the AI-enabled platform will be exploited to detect cyclists, joy runners, including joggers and scooters, on the track and determine the current occupancy of the track. In addition to detecting if cyclists are wearing helmets, the smart solution will also monitor the speed of cyclists. “

The RTA said: â€œFurther trend analysis will enable the collected data to predict and prevent critical cycling incidents such as congested lanes and crashes, and alert authorities to conditions of increased risk based on the data. collected. “

Meanwhile, RTA announced a historic partnership to launch the digital Christmas card – used in public transport in Dubai – on Huawei Watch. The announcement follows RTA’s launch of the region’s first digital Christmas card in collaboration with Huawei last year to support the country’s transition to a cashless society.

He added, â€œConsumers can use their Huawei wallets to top up their digital Christmas cards and pay on the go with a simple tap of their smartwatch. This gives customers the option to purchase tickets for RTA transport, shops, public parks, museums and more using the digital Christmas card.