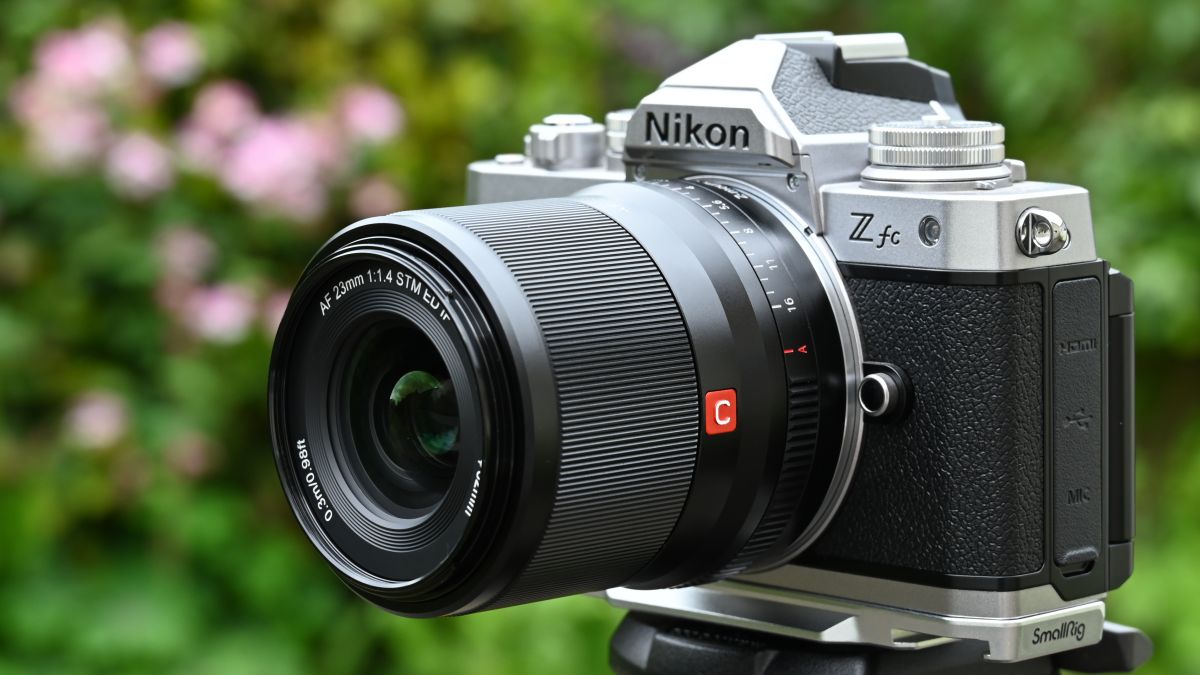 Available in black or silver, the Viltrox AF 23mm F1.4 Z is perfectly at home on the Nikon Z fc (opens in a new tab), not least because it has an aperture ring that complements the camera’s hands-on approach to controlling dials and buttons. It’s one of a trio of f/1.4 lenses, with the 23mm, 33mm and 56mm giving effective focal lengths of around 35mm, 50mm and 85mm respectively, in full-frame terms. These are classic focal lengths for street photography, landscape and architectural shooting, portraiture and more. We tried the 23mm lens.

The widest-angle 23mm lens is typical of the others in the trio in offering a fast f/1.4 aperture. As such, it can provide shallow depth of field, at least at fairly short focusing distances, and allows fast shutter speeds to freeze motion even in low light conditions. Measuring 69 x 74mm and 300g, it’s remarkably small and light for an f/1.4 lens and fits very naturally with Nikon’s Z DX-format cameras. Before the Z-mount editions arrived, Viltrox already made all three lenses in Canon M, Fujifilm X and Sony E versions, to fit other APS-C format cameras.

Optical highlights include two ED (Extra-low Dispersion) and two HR (High Refractive index) elements, plus HD Nano multi-layer coatings to combat ghosting and flare. The autofocus system is based on a fast, super-quiet stepper motor and the focus design ensures minimal focus breathing, which is another plus for videographers.

We tested the 23mm lens with a Nikon Z fc, on which it feels a particularly natural extension to the body. Given the camera’s dedicated control dials for shutter speed, ISO, and exposure compensation, the lens aperture ring and customizable focus ring are fully compliant with the practical approach.

The aperture ring is ‘unchecked’, allowing for smooth transitions for video capture, although it’s arguably less ideal for stills shooting. One problem with handling is that unlike many “smart” lenses which allow aperture control from the camera body as well as an aperture ring, it doesn’t There’s no lockout switch at the narrowest or “automatic” aperture setting. So it’s easy to shoot in auto mode and find that you’ve accidentally pushed the aperture ring and suddenly are shooting at f/16 when you didn’t mean to.

In other respects, build quality and handling are both very good, from the brass mounting plate and metal body to the fluorine coating on the front element. A metal bayonet lens hood is also supplied with the lens. The build incorporates a USB-C port that you can use to apply firmware updates.

As well as delivering fast and consistently accurate autofocus performance, the lens is impressive in terms of image quality. Central sharpness is excellent even when shooting wide aperture at f/1.4, although the corners are relatively soft.

Axial and lateral chromatic aberrations are minimal, barrel distortion is only slight, and ghosting and flare resistance is very good. The bokeh is nice and fluid at f/1.4 and remains of good quality when stopping a little. All in all, it’s a very capable device for such a budget lens.

Vignetting is reasonably limited for such a small f/1.4 lens, as seen in this pair of images taken at the widest aperture with auto-correct on and off.

Vignetting is reasonably limited for such a small f/1.4 lens, as seen in this pair of images taken at the widest aperture with auto-correct on and off.

We carry out a range of laboratory tests under controlled conditions, using the Imatest Master test suite. Pattern shots are taken over the full range of apertures and zooms (where applicable), then analyzed for sharpness, distortion, and chromatic aberrations.

We use Imatest SFR (Spatial Frequency Response) graphs and analysis software to plot lens resolution at the center of the image frame, corners and mid-distances, over the full range of aperture settings. and, with zooms, at four different focal lengths. The tests also measure distortion and color fringing (chromatic aberration).

Sharpness is excellent in the center of the image frame, even at wide apertures. The rest of the frame is rather less impressive at f/1.4 but the region between the center and the edges becomes strong at f/2.8, and the edges and corners hit their stride at f/5.6.

There’s fairly little color fringing in the f/1.4-2.8 sector of the aperture range, even less at f/4 and it becomes minimal at f/5.6 and at narrower apertures.

There is only slight barrel distortion, even without using the in-camera correction. It’s refreshing to find a new lens designed for mirrorless cameras that doesn’t rely heavily on an artificial solution.

If you’re looking for a fast DX-format (APS-C) prime designed exclusively for your Nikon Z 50 or Z fc, you won’t find any own-brand options. It’s one of a trio of compact, affordable yet high-quality f/1.4 prime lenses from Viltrox, its companions having focal lengths of 33mm and 56mm. Already available in other mounting options, they are great performers and great value for money and give you hours of prime viewing you simply can’t get from Nikon.

THE BEST OFFERS OF THE DAY