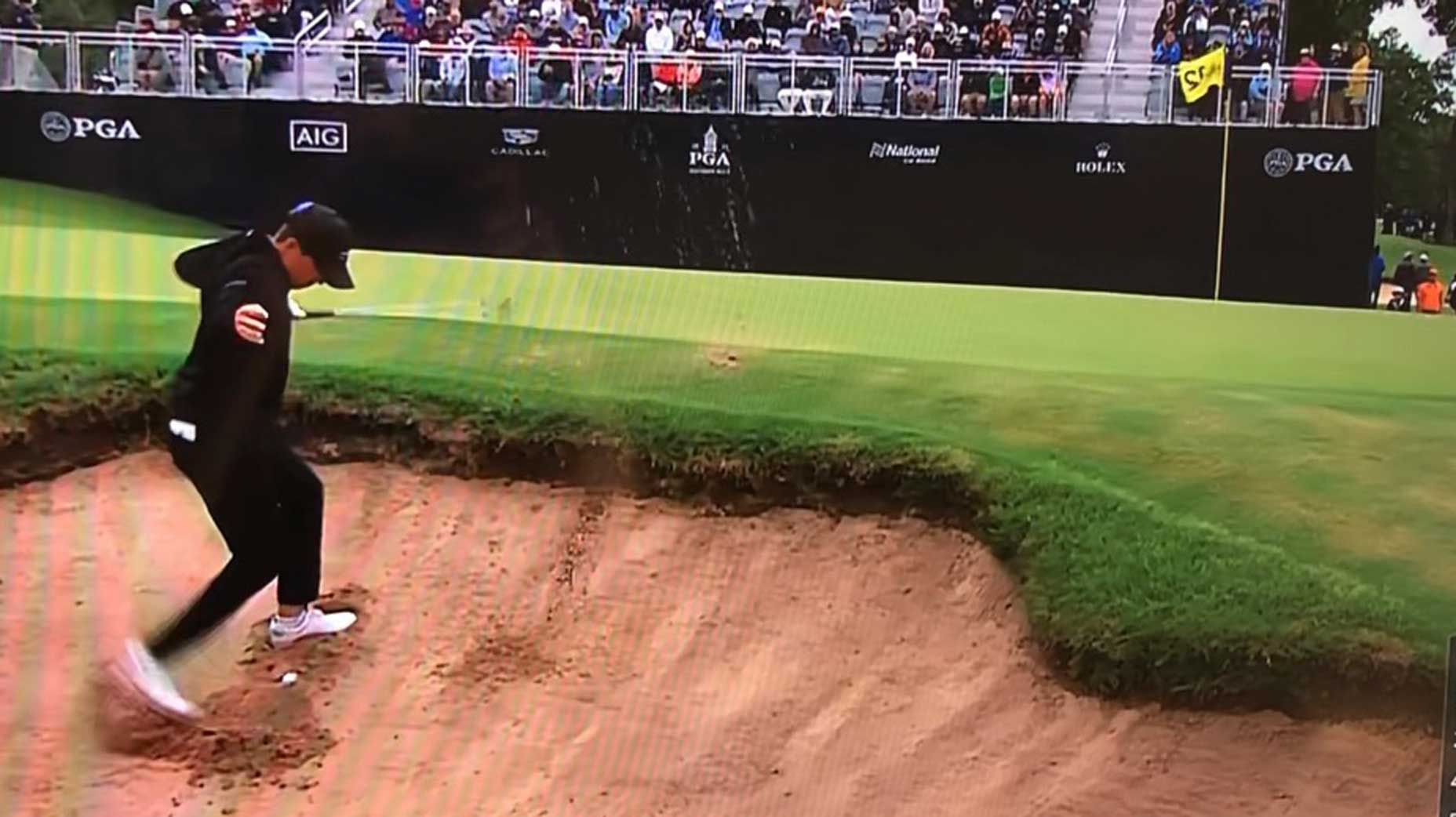 The pros ricochet off himself, the rules are questioned – then there is a miracle

Kramer Hickok Saturday in the bunker on the left green side of the 12th hole at Southern Hills.

He hit the lip twice. He hit himself. TV analysts wondered if there would be a penalty for this.

Then Kramer Hickok holeshot, raised his right hand, punched a smiling Jon Rahm and tried to count all his shots.

“This is the craziest thing I’ve seen today,” analyst Ian Baker-Finch said on the CBS show.

So be it. Late in the third round of the PGA Championship on Saturday, Hickok went down for a bogey-5 on the 452-yard par-4 12th at Southern Hills. Although the entertainment value is also above average.

The streak began after Hickok threw his second shot into the bunker on the left green side, about four feet below the lip. Shot three hit him. The ball then ricocheted backwards, Hickok slid backwards to try and avoid it, and it touched his right foot, before settling into the mark where he was standing.

If you wondered if the contact was a penalty, you wouldn’t be alone. Prior to 2019, this was the case.

“Oh, it’s even worse now too,” analyst Frank Nobilo said on the CBS show. “He’s going to take a penalty and look at the lie – it’s in his print.”

“Oh, he’s going to need the rules help for that one,” analyst Nick Faldo said.

In effect. According to Rule 11.1a, “If a player’s ball in motion accidentally hits a person or outside influence: there is no penalty to either player. This is true even if the ball touches the player, the opponent or any other player or one of their caddies or equipment. (A good explainer of why the rule was changed can be found here.)

PGA of America rules official Brad Gregory said on the CBS show: “Yes, it was part of the 2019 rules package, that these accidental no-shows are treated as accidents and there is no is no penalty, and you just play the ball as it lies.”

Hickok continued. But with the ball now partially covered by the imprint he created, he could only manage to hit the ball a few feet away – where the lip was still. His bullet ebbs again. Hickok took a step to the right before settling for his third swing from the sand.

Then he rolled his ball.

He fell about 10 feet before he found the middle of the cup. Hickok punched Rahm, his playing partner. His fist slammed into his caddy. And Rahm’s. CBS cameras then caught him trying to add up his shots with his fingers.

“This one, you think it’s bad,” Nobilo said on the show during a replay of the footage. “But watch out for the ball. I mean, it’s gonna be like, bang, it’s gonna hit me. Has the rule changed? Because as a player you have to think about it. And now you’re leaving, oh no. So another crack. Third bunker shot.

“Sand on that ball and stuff, it still fits.”

Nick Piastowski is an editor at Golf.com and Golf Magazine. In his role, he is responsible for editing, writing and developing stories in the golf space. And when he’s not writing about ways to hit the golf ball farther and straighter, the Milwaukee native is probably playing the game, hitting the ball left, right and short, and drinking a cold beer to clear his score. You can contact him about any of these topics – his stories, his game or his beers – at [email protected]