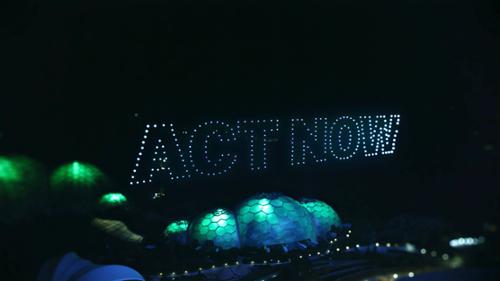 Almost 300 drones were used to signal an environmental message over the biomes of the Eden project, during the United Nations Conference on Climate Change (COP26).
The Eden Project has collaborated with display company Celestial – whose fleet of drones is currently the UK’s largest – and Volvo Car UK to create a 90-second film imploring world leaders to act now to combat global warming. The film can be viewed here: https://youtu.be/MLhN7jqG6GE
The story is told from the perspective of a visiting alien and was created by nearly 300 drones hovering over famous Project Eden biomes.
The unique film shows the illuminated solar drones forming kaleidoscopic 3D patterns. The film begins with the appearance of a small blue sphere surrounded by orbiting stars.

The motif transforms into a tree, a fish, a bird, then a human, conveying the idea that “all living things are connected in a dynamic dance, transforming and dependent on each other”.

In the film’s closing scene, the human, disconnected from other life forms, splits into hundreds of points of light and transforms back into Earth, as the stars swirl around her. The galaxy of stars then reunites for the last time with an order from the alien: “Oi, Earthman! ACT NOW. “

The film is supported by music by Sigur Rós and narration by broadcaster Gemma Cairney.

Nick Kowalski, Co-Founder and COO of Celestial, said: “We are incredibly proud of what we have produced – a body of work that fuses art, cutting edge technology and a powerful message.

“World leaders must act to address the climate and natural crisis, to inspire and accelerate essential actions to save the planet. We hope this is the first of many collaborations with Eden Project and Volvo Car UK, and we warmly thank the entire Celestial team for another great job.

David Harland, CEO of Eden Project International, said: “With our new film, we have chosen a dramatic way to make world leaders understand that they must act now. To support this, we will continue to do everything in our power to rebuild the relationship between people and the natural world.