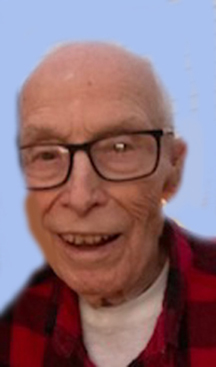 Stanley A. Penner, 91, of Henderson, died Wednesday, August 31, 2022 at his home.
Stan’s wishes were to have no services. Stan will be buried at Faith Evangelical Bible Cemetery south of Henderson. The Higby-McQuiston Mortuary is responsible for arrangements. Condolences can be emailed to the family through the morgue’s website at higbymortuary.com.
Stanley Alvin Penner, son of Cornelius I. and Ruth I. (Newman) Penner, was born on a farm south of Hampton, March 24, 1931 and died in Henderson, August 31, 2022, aged 91 .
The family moved to a farm west of York, and in 1942 moved to Aurora. Stan graduated from Aurora High School in 1948. He earned an advanced accounting degree in 1950 from the Lincoln School of Commerce, while working at the Cornhusker Hotel and Nebraska Boiler & Supply to put himself through school .
Stan enlisted in the US Air Force in November 1950. He attended electronic technical schools; served in Korea for a year, then stationed at Bergstrom AFB in Texas until his honorable discharge in November 1954. Stan attended the University of Texas at Austin, majoring in personnel. He had 160 credit hours, but had no degree.
Stanley’s professional career was one he was proud of. In February 1961, appointed personnel director of Travis State School, Austin, Texas. He held the position for three years, as the student population grew, as did the staff Stan helped recruit for the school. While there, Stan founded the Farm Colony Federal Credit Union. He was a board member, vice president and office manager of the credit union.
In September 1964, Stan began a new career in the insurance industry as a group insurance underwriter with National Bankers Life Insurance Company, Dallas, Texas. He worked his way up to director and vice president of Southern National Life Insurance Company in Dallas, Texas.
In November 1970, creation of the Stan Penner insurance agency. He was a licensed property and casualty insurance agent in Texas and the agency was active until he moved to Nebraska in December 2012.
In February 1972, Texas Camper Corral, In. started a recreational vehicle business, in Austin, Texas, with Wallace Pratt. He sold his ½ of the business to his partner in November 1976.
In August 1981, because of his experience in risk management and loss control, he was employed by Robert E. McKee, Inc., a national general contractor, as the Dallas Division Safety Directory. Some of his memorable works are: Super Conduction Super Collider, Waxahachie, TX, American Airlines Maintenance Hangars, DFW Airport, and University of Texas/MD Anderson Cancer Center, Houston, TX. Stan retired in October 1997, returned to work in January 2001 at Hensel Phelps Construction Co., and retired again in November 2004; returned to work in March 2008 at The Beck Group in Dallas, TX and retired again in January 2009.
Stan was married three times and it all ended in divorce; the first for 11 years, the second for 10 years and the third for 2 years.

Stan has four children from his first marriage: David, Kenneth, Pamela and Deborah.
On March 14, 1980, Stan met a very special person at a Parents Without Partners dance. Mrs. Billie McCulloch was a very special friend, longtime companion, love, lover and beloved who shared with me the joys and sorrows of life’s journey. Billie died on June 24, 2003.
On November 9, 1986, Stan’s outlook on life was changed by a heart attack; surgery was not necessary, medication corrected the situation. The lesson he learned: accept each day as a gift from God and thrive in it. Choose to make full use of the opportunities for growth and pleasure of this day. No matter what happened yesterday, start today with a fresh start. Today is a new beginning, as it is a whole new time frame.
Stan was elevated as a Master Mason on February 28, 1963. He was a life member of Onion Creek Masonic Lodge No. 220, AF&AM, Austin, TX, and Austin Scottish Rite of Freemasonry. He is a member of Ben Hur Shrine Temple, Ben Hur Drum & Bugle Corps, Austin, TX and Fidelis Chapter No. 963, OES Austin, TX and; Capitol Lodge No. 23, IOOF, Austin, TX,
Stan was a Life Member of the American Legion and a Veterans of Foreign Wars Distinguished Fellow of the American Society of Safety Engineers.
The trip took Stan to Korea and Japan while in the military; to many other states in the South, Southeast, Southwest, Midwest and West at work and on vacation.
Photography is a hobby that Stan loved and was very good at. He had several 35mm cameras; 4 digital cameras and took lots of photos. Gardening was also a passion he had but didn’t always have the space to have it.
Stan moved to Henderson in December 2012. He loved the small town life.
Stan’s family includes his grandchildren, Allison, Marilyn, Andy Jr., Kyle and Kevin and his great-grandchildren, Josh, Maddie, Max, Hector, Roland and Oscar.

Chennai-based hospital to use drones to transport organs for transplant