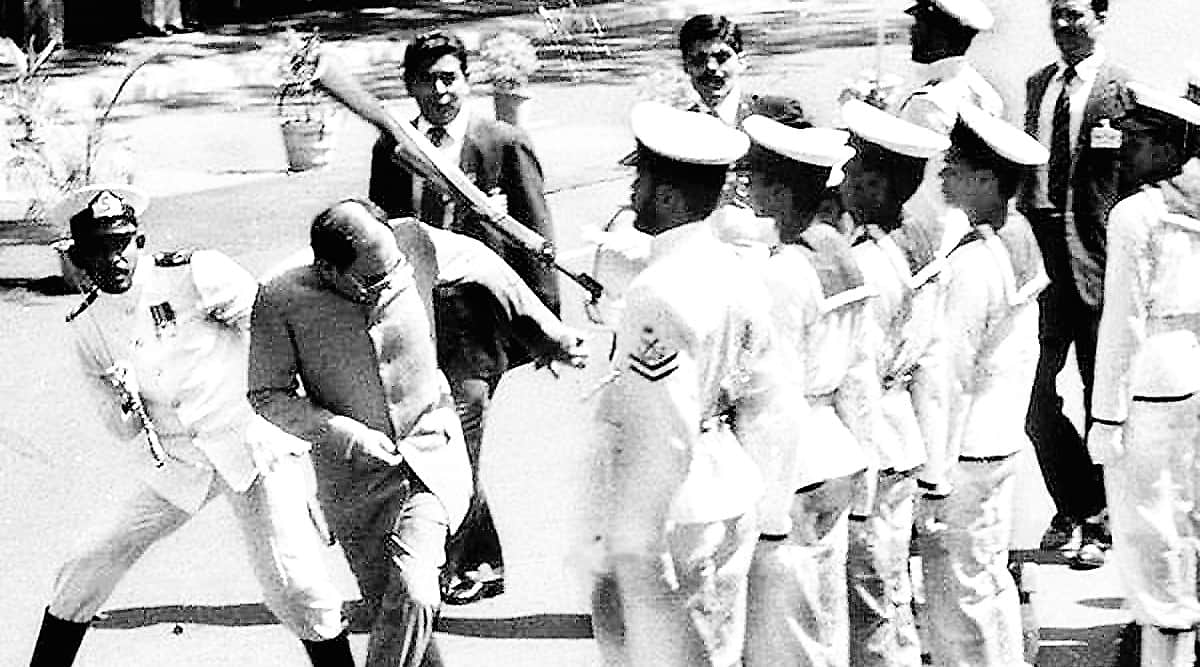 Rajiv’s photo getting hit – the story in a frame

Few photographs can claim to have captured the exact moment. Even Henri Cartier-Bresson, the master, finally said that it was all a matter of luck. And luck was with Sena Vidanagama on July 30, 1987.

Vidanagama, who died on June 6, aged 76, was a photographer for Sri Lankan government publications Lake House, whose stable of newspapers includes the Daily News. He and Amal Jayasinghe, then a reporter for the Daily News, were assigned to cover the departure of Rajiv Gandhi from Sri Lanka a day after the signing of the India-Sri Lanka agreement. Vidanagama’s black-and-white photograph of what happened that day, taken with an Asahi Pentax, would earn him – and Vidanagama – a place in the pantheon of journalism’s greatest moments.

The omens around the Accord were not auspicious. The news that Indian soldiers were to be stationed in the Tamil-dominated northeast had already created an uproar in Sri Lanka’s Sinhalese-dominated south. Nationalist anger at Indian intervention – India’s training of Sri Lankan militants, an IAF food drop over Jaffna in June 1987 at a time when Sri Lankan forces had besieged the northern peninsula and thought they were about to win, the culmination in the landing of Indian troops – would lead to a full-scale insurrection over the next three years.

On July 28, a day before the Accord was signed, 19 people were killed in Colombo when police opened fire on protesters. In Delhi, there was uncertainty over Prime Minister Rajiv Gandhi’s two-day visit to sign the deal. But it was decided that the agreement should be signed as planned.

The best of Express Premium

On July 29, Colombo was under curfew. A contingent of 10,000 Buddhist monks gathered to march to the airport to protest Gandhi’s arrival. As they broke the security cordon, the police fired on them, killing five people. Gandhi was accompanied by his wife Sonia. They arrived with their own armored car and a large security contingent, and proceeded straight to a welcome ceremony at Galle Face Green. Prime Minister Ranasinghe Premadasa was conspicuous by his absence. The agreement was signed later in the day at the presidential palace further up the road.

On July 30, as Gandhi prepared to return to Delhi, he would leave an angry nation behind – in the north the LTTE had rejected the deal.

At the Daily News, Jayasinghe and Vidanagama were assigned to cover the departure ceremony. “It was not a high-priority mission, just a ceremonial event,” recalled Jayasinghe, who later headed AFP’s Colombo bureau.

While a band was playing, Gandhi inspected the formation of the navy. A sailor came out just after Gandhi passed him and brought his gun butt down on the PM. Gandhi ducked, looking back as he did, and took the hit on his shoulder. Within minutes, he was back beaming on the ceremonial dais with Sonia, President JR Jayewardene and the First Lady. The 22-year-old sailor, Wijemuni Vijitha Rohana de Silva, was arrested and eventually sentenced to seven years in prison. He was released after a few years following a pardon from Premadasa who had by then become president.

Vidanagama was the only photographer to capture the moment of the attack in a static shot, remarkably full of movement – Gandhi dodging, the butt of Wijemuni’s rifle swinging over his shoulder, the guard next to Gandhi leaning to the side.

Remember, it was years before the first digital camera came along. Back then, cameras had to be loaded with film, and after each shot a lever was operated to move the film to the next frame. A photographer could not be sure of the image he had captured before the film was developed and the negatives were hung to dry.

Thulasi Muttulingam, a former Daily News staffer, recounted in a blog post an interview with Sena in which he details how he took the photo from a six-foot-tall media dais on which all viewpoints had was taken by international photographers and official Indian and Sri Lankan television cameras. But everyone thought the mission was over after they clicked photos of Gandhi’s first steps in the honor guard and dropped their camera.

“I too had finished clicking on Rajiv Gandhi inspecting the honor guard, but I kept watching him as he walked down the line of sailors. I acted on reflex when I saw one of the men move away from the orderly line of sailors Gandhi was inspecting. I really didn’t have time to understand or process what was going on. I simply raised my camera and clicked. Deep down I had a vague idea that the sailor was fainting, but after all, even that was news. I had no idea at the time that I was clicking an assault. Everything happened very quickly… If I had had a camera with today’s technology, I could have taken all these photos but I had to launch my Asahi Pentax before each new shot, to do well focus and thus lose quite a bit [moments]. Back then, you couldn’t click through images one after another like you can now. »

With the coil stuffed into his socks, Vidanagama ran with Amal to Lake House. But it was hardly certain that photography would see the light of day. There was a confrontation between the editor and the boss of Lake House, who was also an adviser to the president.

The president had previously told the media that it was an accident – Wijemuni, the attacking sailor, fell from heat stroke. This was the story that the Sri Lankan government wanted to remember. Vidanagama’s photographs showed the opposite.

The Indian side also wanted to downplay the incident, writes ANI President Prem Prakash in his book, Reporting India. On the plane back to Delhi, as he recounted the incident to the rest of the hacking pack, the Prime Minister’s media adviser, HY Sharada Prasad, told him not to spread “misinformation” and that “there was no such incident”.

Amid protests from reporters, Gandhi watched the tape during the flight. Prakash told him that the entire international press was certain to have captured the incident. Both parties quickly realized that it was useless to hide the facts.

Sena’s photo appeared on the front pages of not only the Daily News, but also newspapers around the world. As for Wijemuni, he dabbled in politics, became an astrologer and was arrested again in 2018 for predicting an attack on President Maithripala Sirisena.

Vidanagama’s photograph became the definitive image of the attack. I treasure a copy given to me by the photographer as a piece of journalistic excellence.

How many Big 12 prospects will make it to the first round?

Check out these 6 things before buying the OnePlus 10R