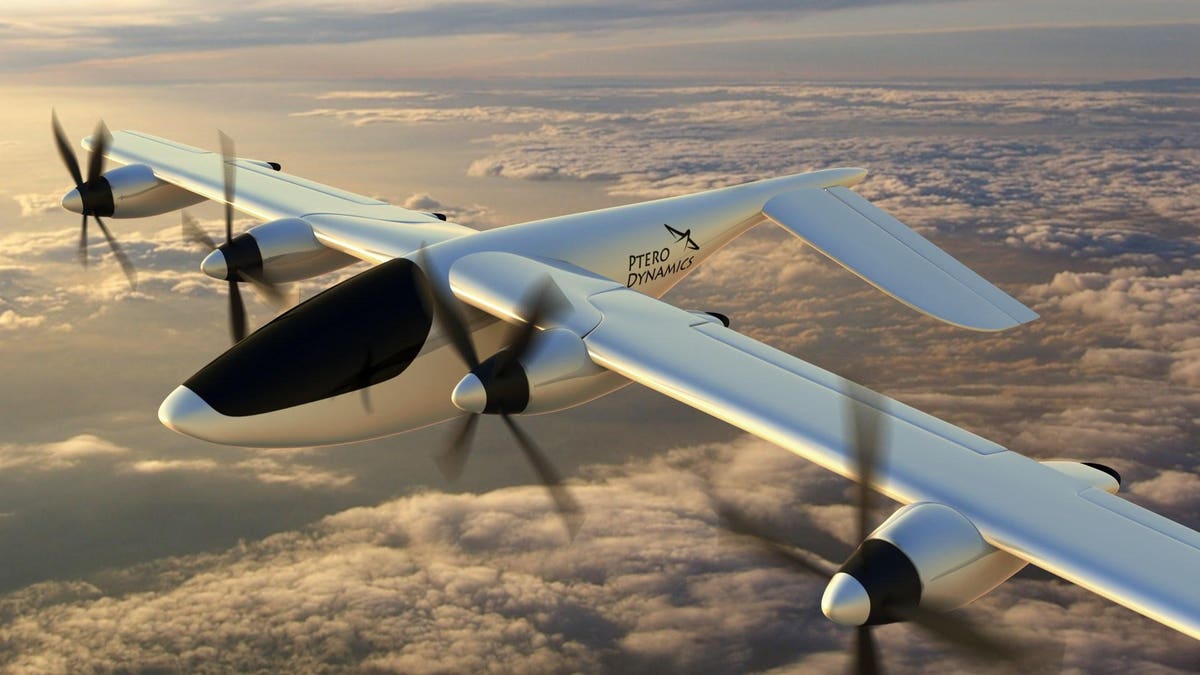 Watching the tiny unmanned plane that California startup PteroDynamics calls the Transwing transition from horizontal to vertical flight is reminiscent of how an osprey turns and folds its wings backwards during a dive. But the little UAS is not a hunter. It is introduced to the US Navy as a lightweight cargo carrier whose wings intelligently fold up for VTOL landing and take-off.

Transwing’s setup is new for a small unmanned aircraft system (sUAS) – part rear quadrotor, part tilt wing, part lift and cruise. Its method of transitioning from cruise to eVTOL flight and back, combining ram-shaped struts with dihedral joint in one continuous sweep, is deceptively complex but elegantly simple.

This is the idea of ​​Val Petrov, a former specialist in quantitative modeling and portfolio manager of fixed income securities who experimented with eVTOL concepts in the mid-2000s. He proposed the Transwing concept, now patented in 2016, recognizing the inefficiency and awkwardness of existing UAS VTOLs and manned aircraft designs.

The small startup he founded claims that the 12-foot-long Transwing autonomous prototype offers better controllability during take-off, landing and hovering than other eVTOL UASs. With a ground footprint of about a third of other aircraft with the same 13-foot wingspan, it could operate in more compact landing / take-off zones than other UAS.

And with an eye on the Navy, PteroDynamics claims it can handle the changing, swirling gusts associated with VTOL on and off ships better than anything the service has rated so far.

In 2018, Military Sealift Command and Navy Fleet Forces Command conducted an analysis of resupply operations typical of naval formations at sea. Since the advent of the helicopter, the Navy has airlifted supplies, equipment and even urgent personnel between ships at sea via aircraft.

This practice has long been known as “vertical resupply” or VERTREP, and a long line of VTOL aircraft up to the present day SH-60 Seahawks and V-22 Osprey have spent countless hours and hours. countless pounds of fuel to commute between ships. The analysis confirmed what many in the Navy have long known: About 90% of critical repair cargoes delivered to sea by helicopters and V-22 planes weigh less than 50 pounds.

This does not appear to be an efficient use of the large, multi-mission, multi-million dollar, multi-mission planes. Small to medium-sized UASs, the Navy realized, might be able to perform most VERTREP missions just as quickly but much less costly.

“We want to develop a logistics system to get rid of helicopters that carry parts back and forth,” Tony Schmidt, director of rapid prototyping, experimentation and demonstration at Naval Air Warfare Center Aircraft, told USNI News. Division (NAWCAD).

There was a call to industry for the capabilities NAWCAD was looking for in small cargo transport UASs, and the Navy submitted the drones for an assessment during the 2019 Advanced Naval Technology Exercise. Participants had to prove that their plane could autonomously carry a 20 pound payload to a moving ship 25 miles away without refueling.

About 65 potential UAS freight carriers were analyzed, but only two met the requirements. Still, the Navy wasn’t getting exactly what it was looking for according to PteroDynamics CEO Matthew Graczyk.

“They found winds to be a particular problem with the other vehicles they were evaluating and they found that our design had the prospect of providing a superior ability to handle gusty situations.”

In April 2019, NAWCAD approached the company to assess Transwing. “That’s when we started this conversation and made the deal we signed with them in June of this year,” says Graczyk.

The contract calls for PteroDynamics to deliver three prototype VTOLs for the Navy’s UAS Blue Water Maritime Logistics program by June 2022. Another company, Texas-based Skyways, delivered its own prototype UAS cargo ship in the fall. latest.

“Transwing was chosen as one of the most promising innovative designs for evaluation over traditional designs,” confirms NAWCAD spokesperson Brittany Dickerson.

Val Peterov says that a key element in attracting interest from NAWCAD is the fact that all of Transwing’s electric thrusters are used for both lifting and cruising, unlike other sUAS designs which dedicate separate thrusters. to propulsion lifting and forward.

Minimizing weight by abandoning the thrust-producing components that are not used during all phases of flight is indeed a priority for NAWCAD, while reducing the total number of parts for any logistics UAS. Other goals are to minimize the size of the aircraft for on-board handling and recovery and to obtain an aircraft with a stable and rapid transition between VTOL mode and fixed-wing mode to maximize flight time and the exits.

Transwing appears to meet these requirements, although its suitability will not be established until after its three prototypes have been delivered to NAS Patuxent River in Maryland for evaluation next summer. This gives PteroDynamics a window to step through program milestones (critical design review etc) and get the trio of Transwings delivered.

But the company has no idea how long the NAWCAD assessment will take. For a small business yet to scale, the wait – and any delay – can be daunting.

PteroDynamics expects to be cleared to participate in the next phase of BWUAS by the end of September 2022. The company is funded by a combination of angel investors and early stage venture capital from Kairos Ventures. Graczyk acknowledges that PteroDynamics will endeavor to raise additional funds “round after round” to stay afloat pending the outcome of the Navy assessment and beyond.

It’s the classic “valley of death” problem that small innovators looking to work with DoD have faced for decades, an urgent race to secure the next research or production contract before the cash runs out. exhaust. PteroDynamics seeks to bridge the gap between assessment and decision by giving NAWCAD assessors everything they need to get down to business planning the next phase of BWUAS and alternative markets.

Graczyk says he wants to make sure the Patuxent River test team can “start flying immediately” after receiving the drones. PteroDynamics thus strives to provide NAWCAD with all the paperwork (procedure manuals, authorizations) and to train testers on Transwing as soon as it is in their hands.

The company is also working on a larger version of the UAS which Petrov sees no problem with scaling. The Transwings prototype that Pterodynamics will hand over to NAWCAD will be battery-powered with fixed-pitch pro-rotors. With a maximum takeoff weight of 73 pounds, they should be able to carry a payload of 15 pounds at 65 knots over a distance of 67 NMi.

But the prototypes are really a stepping stone to a larger, around 320-pound Transwing that can carry a 50-60 pound payload with an expected range of 930 NMi and 12-hour endurance – the size drone type. average that the Navy finally plans to use for VERTREP.

“We have projects underway to explore the potential of this setup for high speed, over 150 knots,” said Tim Whitehand, vice president of engineering at PteroDyanmics. That’s the kind of speed a BWUAS will need to travel distances to catch a ship at sea, observes Whitehand.

To get that speed and range, to overcome the limitations of battery-electric technology, Whitehand says the larger Transwing will use hybrid propulsion. This can take the form of a fossil fuel generator to power the batteries of the electric motors or a direct drive to the pro-rotors.

This flexibility could extend to the commercial markets PteroDynamics is exploring, where high speed and short lead times combine with high-value payloads for expedited logistics. The Bell APT-70 seeks to respond to the same logistics market in a timely manner.

“The same Transwing benefits applicable to DoD apply to the commercial sector,” said Petrov. “A small footprint might not be as critical, but efficient forward flight is. We are outperforming all other STOL planes from what we can see. ”

This performance, along with the maritime mission for which a larger Transwing is optimized, could be of significant interest to the offshore oil and gas industry, which uses helicopters for refueling in the same way the Navy does. Graczyk points out that such a market – with UAS transits over water – will likely have far fewer regulatory hurdles than the still largely non-existent average payload market on land, calling it the ideal “training route.” for UAS logistics.

PteroDynamics is also looking to put Transwing forward for other DoD requirements. Graczyk said the company has already been selected for two DoD programs that it will not name. In addition, its three currently granted patents and its five pending patents represent valuable intellectual property, useful for financial leverage or for sale if such option is exercised.

Transwing’s ability to go from cruise to hover is its secret sauce, says Tim Whitehand. “We don’t have to detune it to take off and land. We can enter the transition phase at cruising speed, above the stall. We don’t need flaps, anything to slow us down to a safe speed for [vertically] Earth.”

To land a contract for Navy VERTREP operations, PteroDynamics will have to make the transition from startup to aircraft manufacturer just as gracefully.