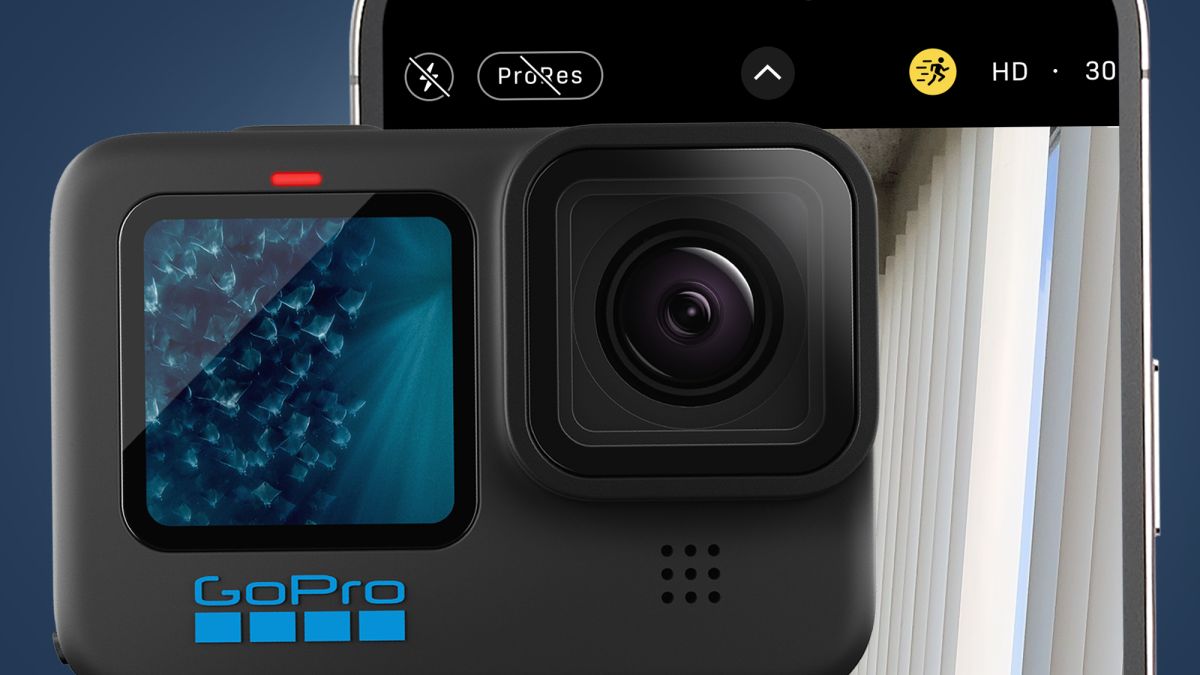 GoPro is used to battling DJI and Insta360 in a Squid Game-style battle for action camera supremacy, but this year an unexpected competitor entered the fray: Apple.

This week we saw the arrival of the highly anticipated GoPro Hero 11 Black, a direct successor to what we believe is the best action camera money can buy. But just a week earlier, Apple heckled GoPro by launching its iPhone 14 and iPhone 14 Pro smartphones with a shiny new video feature called Action Mode.

This feature is actually Apple’s version of GoPro’s HyperSmooth technology, a powerful form of digital video stabilization that works by cropping into the camera‘s wide-angle view, leaving the outer edges of the frame free to correct shake. and vibration.

This creates a gimbal-like effect without the need for additional accessories, with HyperSmooth having been a staple of GoPro action cameras since it was first introduced on the GoPro Hero 7 Black in 2018.

So has Apple finally cornered the lucrative action photography market? Tim Cook and company would certainly like to think so, but the reality is a bit different. While the iPhone 14‘s Action mode was certainly impressive in our first tests, it has more limitations than the stabilization effects possible on the Hero 11 Black. And the latter, naturally, maintains a degree of durability that Apple’s smartphones simply can’t match.

Why is Apple’s Action mode more limited than GoPro’s HyperSmooth? For starters, Action mode primarily uses the iPhone 14 Pro’s ultra-wide (13mm) lens, which has a relatively small 1/2.55-inch sensor and f/2.2 lens (the iPhone 14 standard has an even smaller sensor and a slower f/2.4 lens). Both setups mean you need plenty of light for Action mode to work effectively, and it’s likely to struggle (or be entirely unavailable) in dark environments.

The Hero 11 Black, on the other hand, has a larger 1/1.9-inch sensor, which means its HyperSmooth feature can work in moderately lower light conditions. It’s still not brilliant in these situations, but you’ll definitely get more versatility from the GoPro than the iPhone when you’re in the mountains, on the water, or anywhere else you like to get your adrenaline pumping.

That 1/1.9-inch sensor, and in particular its 8:7 aspect ratio, also gives the Hero 11 Black leeway for more stabilization tricks, like the very impressive 360-degree Horizon Lock.

The GoPro Hero 10 Black already uses “Horizon Leveling” technology to correct images that have been skewed up to 45 degrees, but the Hero 11 Black goes a step further by keeping images straight even when the camera is rotated 360 degrees.

It works with all resolutions and frame rates (except for 5.3K/60p, 4K/120p, 2.7K/240p, or 1080/240p, where you’ll get standard horizontal leveling for angles up to 27 degrees), and In our brief experience testing the Hero 11 Black, we were very impressed with the effectiveness of Horizon Lock.

Apple’s Action mode doesn’t give you the same degree of freedom to randomly move your iPhone’s camera up, down, left, and right without losing the stable orientation. Granted, most users won’t launch their devices into a horizon-changing spin – and Action mode has some roll correction – but the inclusion of Horizon Lock in the Hero 11 Black marks another small victory over the iPhone-as-action-cam.

The same goes for how much control you can have over the level of stabilization of the GoPro. The Hero 11 Black offers varying degrees of HyperSmooth – standard, Boost, and AutoBoost – that allow you to tailor stabilization to specific activities.

For example, you don’t always want a super smooth floating effect for things like mountain biking, where a little jolt can create a more realistic look. The Hero 11 Black – unlike Apple’s Action mode – allows for more relaxed cropping, and these different HyperSmooth strengths are available in just about any resolution, frame rate, or digital lens.

At present, GoPro’s stabilization also beats its rival Apple for resolution options. The Hero 11 Black gives you stabilization for footage shot at up to 5.3K/60p, compared to just 2.8K on the iPhone. Then there are the additional effects available to you with GoPro, like TimeWarp, which combines timelapses with HyperSmooth to let you capture super stabilized timelapse videos as you move through a scene.

Naturally, the durability of the GoPro is also a factor. Apple reinforces the structural integrity of its iPhones on a yearly basis, but there’s no way a four-digit iPhone 14 Pro would be taken to the mountains or on the water without some form of additional protection.

The Hero 11 Black, however, is ready to go out of the box. Its housing is pretty much indestructible – we put its scratch-resistant lens cover through its paces in a particularly ghastly mountain biking incident, and the camera remained completely undamaged – and its built-in mount allows attaching it to action objects like handlebars and surfboards a breeze.

To be clear, we’re certainly not discrediting Apple’s Action mode. We were happy to see the feature announced at the company’s launch event in September, and it’s so far proven to be an effective (if not gimbal-level) method of occasional stabilization in our early tests. .

We also expect Action mode to become much more powerful in the coming years. Cinematic mode, for example, was recently upgraded to 4K resolution, having been limited to 1080p at launch.

But Apple’s first major foray into action videography remains, for now, a feature primarily designed to enhance footage captured while walking and running. Action mode isn’t, as some have suggested, GoPro’s killer – at least not for those into more adventurous sports (read: most outdoor activities).

The Hero 11 Black offers higher quality video, more granular stabilization control, and a host of useful effects like Horizon Lock and TimeWarp, along with the obvious durability benefits granted by its rugged design.

Apple’s shiny new mode may well hurt the Hero 11 Black’s appeal to vloggers, which could impact the popularity of GoPro’s Hero 11 Black Creator Edition and other vlogging cameras like the Sony ZV -1. Between an improved cinematic mode and action mode, the iPhone 14 series could definitely carve out a place among the best vlogging cameras.