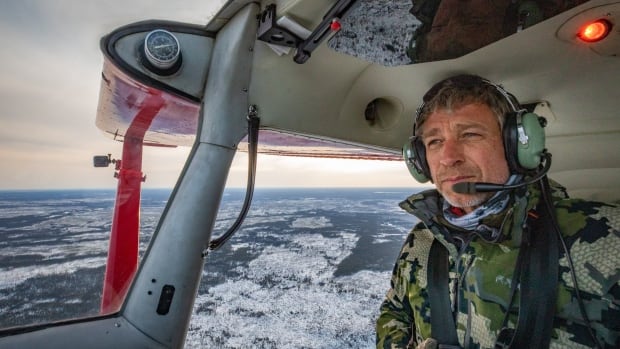 Mike Forsberg, a conservation photographer from Nebraska, has been traveling the “cantor’s route” for a month following the migration path of whooping cranes, an endangered species since 1970.

Forsberg and his three-man team document the changes in the crane’s migration path and the people who encounter them along the way, to show the importance of conserving their habitat.

To do this, the team set up time-lapse cameras all along the migration corridor. Each camera, about 12 in total, will take a photo every half hour for the next year.

The Whooping Crane is often considered a conservation success. On the brink of extinction in the 1940s and 1950s, a small herd of whooping cranes has thrived since the 1970s, in part due to an international effort. In 2018, the flock consisted of approximately 508 birds.

Cranes spend the winter months along the Texas coast at the Aransas National Wildlife Refuge and nest in the wetlands of Wood Buffalo National Park during the summer months.

The first camera was placed at Aransas National Wildlife Refuge and the last at Wood Buffalo.

“You can see the seasons change, you can see the weather change,” Forsberg said. “You can bring the earth to life in a way that makes it a living, breathing thing.”

Their plane was also equipped with go-pro cameras, one on each wing, one on the tail and one in the cockpit.

The team only moved to the next location when all the outside conditions allowed, which meant making the same decisions the cranes make while on the move.

Forsberg plans to write a book about the experience, which will include photos and a collection of voices from people he met along the way. The research they collect will be used to create educational resources and eventually, he hopes, a documentary.

Schaefer was able to share what he learned from observation and oral history about the northern crane diet of snails, frogs and snakes, which Forsberg says was previously unknown to biologists. from South.

Schaefer hopes this project will highlight the importance of whooping cranes in the region.

“We have a bylaw prohibiting trespassing, but it’s not enforced,” Schaefer said.

He also said the Salt River First Nation, where some of the cranes are nesting, intended to employ a conservation officer to monitor the area, but that hasn’t happened either.

Schaefer is most concerned about camper traffic in the nesting area during the long weekends in May and August. He previously put up signs to educate people about endangered species in the area, but finds that they are mostly used for target practice.

“It’s an opportunity to share with people how amazing these creatures are,” Forsberg said. “If you can get [people] to appreciate them, so maybe they can appreciate them enough to care.”

Forsberg also worked closely with Lori Parker, ecologist at Wood Buffalo National Park. In addition to helping with the recent trip, Parker will also help coordinate Forsberg’s return to the region in late May.

10 days of waiting in a store

In this final stage of the project, Forsberg plans to photograph a whooping crane nest. It will sit in a blind for 10 days, without going outside, to minimize the impact on the crane’s habitat and other wildlife.

He also hopes to capture nesting sites with Schaefer, sharing the importance of obtaining the oral history of cranes from an Aboriginal perspective.

While in the area, Forsberg will lead a wildlife photography workshop with Wood Buffalo National Park.

He said following the cranes through their 320 km wide migration corridor has been a powerful experience, seeing the landscape change and connecting it with wildlife and people along the way.

“This is an important time to tell the story of these birds,” Forsberg said. “This is the last flock of truly wild migratory birds, if this flock didn’t exist we wouldn’t have whooping cranes on the planet.”

Arlo Go 2 is the cellular security camera you can stick anywhere!